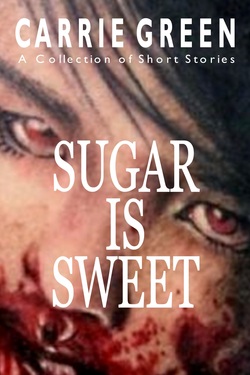 A Collection of Short Stories

PLAYING FOR KEEPS—Sometimes a mother/daughter bond can be so close that it kills.

LOVED—Being loved is sometimes a fairy tale, sometimes, a nightmare.  It all depends on who falls in love with you.

CHRISTMAS IN STRIPES—An ex-con spends his first holiday back home with his family and realizes that you can never go home again.

Dawn hid her head beneath her blankets.  Her parents were fighting again.  She clenched her pillow and her Disney Princess comforter against her ears.  She wanted to get up and go to the washroom, right down the hallway, in the middle between her bedroom and her parents, but she was scared.  When Mommy and Daddy started fighting, her showing up would mean even more yelling.  Suddenly her name would enter the arguments.  What are you doing up, Dawn?  A hand would slice through the air and land on her cheek, or her head, or she’d be grabbed, turned around and paddled hard on the behind.

Her bed was too hot.  She punched a hole out by the top of her head, letting some fresh air in.  She wished that they’d stop fighting.  Dawn crossed her legs, hugging her knees to her chest.  She had to go to the bathroom bad.  She was a big girl and big girls didn’t pee their beds.

There were footsteps and then the sound of the front door being unlocked and slammed shut.  Dawn stuck her head from out of her blankets.  She angled her head towards the rooms beyond her closed bedroom door, listening.  She spotted her Teddy Bear on the floor, but she made no movement to pick him up.  She must have knocked him off of the bed.  He sat on her pillow every morning and she usually cradled him in her arms until she fell asleep.

Dawn lay perfectly still on her bed.  She kept her breath steady as if she was sleeping.  She knew when she moved that her mattress would squeak and alert whoever was still home that she was awake.

The floorboards creaked in the hallway outside her door.  They never made noise when Dawn walked down the hall.  She had tested each board and she carefully avoided the ones that had movement and scraped against each other.  The footsteps were heavy.  It was Daddy.  His loose bedroom slippers made a distinct dragging noise on the wood floor.  It must have been Mommy who left the apartment.

Flinging off her blankets, she ripped open her bedroom door and barreled down the two feet into the hall, right into the bathroom.  Her Dad was caught by surprise, too late he tried to lunge for the bathroom doorway before her, but she was small and quick and beat him easily, shutting the door in his face.

“I got it first!  Ha! Ha!” she trilled out in glee, twisting the lock.

She pee-pee’d.  It was such a relief.  She had felt like her tummy was going to burst.  She peed for such a long time that it sounded like she was running water in the sink.  Finished, she flushed the toilet.

Now there was no rush.  She sat down against the bathtub.  The porcelain was smooth and hard against her back.  Beneath her the black and white hexagon tiles formed in infinite patterns.  In her imagination she saw daisies, stick figures, and lop-sided rectangles.

“Hurry up.”  Her Dad pounded on the door.

Dawn took her time.  She ignored her father.  She climbed onto the ledge of the bathtub and balanced so that she could see almost her whole body in the mirror above the sink.  She lifted her nightgown to look at her round tummy and her belly button.  She dropped her nightgown.  Dawn squinted her eyes at her reflection.  She made a kissy face.  She was very ordinary looking.  Black hair, cut short with bangs.  Boring brown eyes.  She blew out her cheeks like a balloon then she squeezed the air out with her hands and made a fart-like noise.

“Stop playing.  Hurry up!”  Her Dad’s voice came through the door.

She jumped down from the tub ledge and ran the water in the sink, stuck her hands under, then quickly dried them on her nightgown.  There weren’t any towels hanging on the towel rack.  It was broken, had been for a long time.  There was a stinky dirty wash cloth in one corner of the room that had dried to cardboard hardness that she wasn’t about to touch it.  “I’m coming.”  She opened the door.

Her Dad swept past her, ignoring her.  He twisted off the ribbed cap of the mouthwash bottle and poured a jig.

“You’re a lazy asshole.”  Dawn shouted the words that her Mommy had been shouting at him earlier.

“Shut up.”  He sipped the mouthwash and let his head fall back.  He started gurgling.  Dawn couldn’t understand how he did it.  She had tried it, but the mouthwash had burnt so bad.  Her throat hurt, just remembering.

“I hate you,” she said.  Dawn meant it, too.  She felt guilty, saying it, ‘cause Daddy never hit her like Mommy, but he made Mommy angry, that made Mommy hit her.  “I’m not your friend,” she added for spite.  Daddy always said that she was his best friend, that it was her and him against the world.  “I hate your guts.”  Guts was a new word that she had learned from her friends.  It meant something gross in your tummy, like worms, even stronger than ‘I hate you’ alone.

“Shut up, Dawn.”  Her Dad closed the door in her face and locked it.

She stared mutinously at the white surface of the door.  She felt so mad that her Mommy had left, that Daddy had been arguing with her, that she had almost wet her bed because of it.  She hated him so bad.  She wanted to pound her fists, over and over, on the door.

Instead, she turned sharply and went back into her bedroom.  She threw herself onto her bed, attacking the blankets and her pillow.  She wanted to cry.  Why had she been so mean to her Daddy?  Why did he and Mommy have to fight?  “I hate him, I hate him,” she muttered to herself, pounding her bed linens.

Carrie's books are available on Amazon at:
http://tinyurl.com/3oxl7vt.